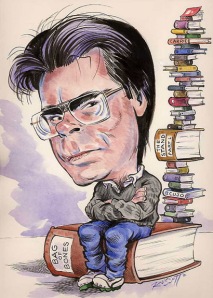 I’ve said before that I started reading Stephen King in seventh grade. What I didn’t say is that I stopped reading his books later in high school because my own spiritual transformation changed my reading tastes. That and the fact that my private Christian school wouldn’t grant class credit for Stephen King or any other secular authors writing about the darker side of spirituality. After testing the limits for a while (like using an e.e. cummings poem for a school project), I finally put down the dark stuff. Then I discovered Frank Peretti’s This Present Darkness (more about that here), which dramatically shaped my view of the Kingdom.

But Stephen King’s words still motivate me. Over the past few weeks, I’ve tweeted quotes from his book “On Writing” and it occurred to me that many of these quotes inspire me because of truth inherent in them. So to satisfy my own spiritual bent, I’ve taken some Stephen King quotes from my Twitter page, and pasted them here along with the corresponding Bible verses. Maybe this counts as a form of delayed rebellion against high school rules. But I’d like to think it goes a bit deeper than that.

MONEY. “Do you do it for the money, honey? The answer is no. Don’t now and never did” Stephen King; “Keep your lives free from the love of money and be content with what you have, because God has said, “Never will I leave you; never will I forsake you” Hebrews 13:5.

INTERRUPTIONS. “I’ve found that any day’s routine interruptions and distractions don’t much hurt a work in progress and may actually help it in some ways” Stephen King; “Do not forget to entertain strangers, for by so doing some people have entertained angels without knowing it” Hebrews 13:2.

POWER. “You cannot hope to sweep someone else away by the force of your writing until it has been done to you” Stephen King; “You hypocrite, first take the plank out of your own eye, and then you will see clearly to remove the speck from your brother’s eye.” Matthew 7:5.

DILIGENCE. “Only God gets it right the first time, and only a slob says ‘oh well… That’s what copyeditors are for’” Stephen King; “Whatever you do, work at it with all your heart, as working for the Lord, not for men” Colossians 3:23.

CREATIVE PROCESS. “We are talking about tools and carpentry, words and style… but you’d do well to remember that we are also talking about magic” Stephen King; “Now we know that if the earthly tent we live in is destroyed, we have a building from God, an eternal house in heaven, not built by human hands” 2 Corinthians 5:1.

I’ve chosen to focus solely on the writing process here. But for those so inclined, a Christian study of Stephen King’s writings about good, evil, and humanity might fill multiple volumes.  After all, we authors and readers alike reach out for something that nails it, something that resonates with the struggle around and within us. Sometimes we find it in the strangest of places…

(For the literalists out there, please know that I’m not equating Stephen King to God. I’m merely pointing out that this successful author, while known for horror and, at times, profanity, is still a creation of God and therefore his writings often reflect the truth found in Scripture. We could do this exercise with any number of authors, including C.S. Lewis, Tolkein, Rowling, Suzanne Collins, etc.)

16 thoughts on “Stephen King and The Gospel”