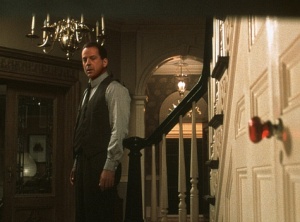 As a college student I had an experience that I’ll remember forever. I was browsing the videos at my neighborhood Blockbuster when suddenly I felt someone standing close behind me. Too close.

I was sure of it… sure enough to step aside in that instinctual reaction to an invasion of personal space. But when I turned around, there was no one there. And yet despite appearances, I knew in the deepest part of my soul that someone (or something) stood beside me, if only for a moment, but whether angel or demon I’ll never know.

It has stuck with me, I think, because of the sensory experience associated with it.

Writing about the unseen is like this. While grounded in reality, unseen forces leave a sensory impression on the reader. These forces can be internal (fear, love, desire), external (disaster, circumstance, actions of others), supernatural, or purely rational – that part depends on your writing style and genre. But the point is that the forces themselves are entirely unseen… and they always act on human nature.

Because unseen forces act on human nature, they almost always elicit some type of physical response. Fear, for example, raises the heart rate. Breathing quickens, pupils dilate. While we can’t see fear, we certainly know when we have it. Good writers will elicit this physical response in their readers as well as their characters.

To write about the unseen, begin with human nature. Then throw in whatever invisible forces your writer’s mind conjures, and watch it play out in your character’s natural response. Your readers will follow.

9 thoughts on “Writing the Unseen: Forces”