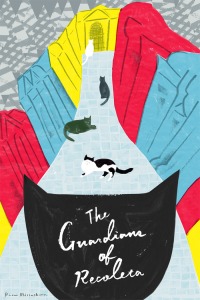 Every now and then a story captures my imagination enough that I break with my traditional blog format to do something different. This is one of those stories.

Cemeteries are usually eerie, lonely places—barren reminders of the dearly departed. Not in Buenos Aires, home to one of the most beautiful cemeteries in the world. For the record, I’ve never been to Buenos Aires. But it’s come to my attention that something strange (and furry) walks between the graves of the Buenos Aires cemetery.

Cats. All kinds of cats.

Despite how it sounds in this pre-Halloween season, this is not from the pages of a Stephen King book. It’s the subject of a documentary called “The Guardians of Recoleta,” currently in production with BE MORE REAL, a global media production firm owned by Blake Kuhre and his wife, Adrienne.

I went to high school with Blake, where we worked together at the student newspaper and other journalistic endeavors on campus. Since then, he’s built a thriving career in broadcast journalism and new media, including ten years with the Walt Disney Company. As director of BE MORE REAL, Blake now describes himself as “a former Mouseketeer turned storyteller.”

Ok, back to the cats.

I want to know more about them.

Cats that hang out in one of the most beautiful cemeteries of the world fascinate me. Maybe I read too many cat stories as a child. Or the early introduction of the Pumpkin Spice Latte to the Starbucks menu has me feeling all spooky. But I think cemetery cats are kind of cool…

And yes, perhaps also a bit spooky. In a beautiful feline sort of way.

“Millions of tourists, thousands of souls, and 9 lives.” – The Guardians of Recoleta.

(Love animals? Interested in these cemetery cats? Crowd funding for “The Guardians of Recoleta” is open through 10/2… click here to support this unique documentary.)